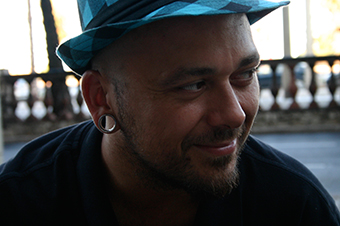 Techno constituted a fundamental piece of his start, with the performances characterized by fury and force in the beginnings of 2000. A great decade for the free parties and clubbing around Spain. Bazar Cache spent many hours rounding and playing mostly in raves in Barcelona, Valencia, Castellón and other places  while he was exploring also with Drum n ́ Bass, Psy-Trance, Electro, House and other styles.

But in his first stay in Berlin, it was essential to decide to bet on music production. In 2008 he realized one of his dreams, teaming up as a producer and head of co-management for the label Novo Music. The quality productions and the great feedback from several DJ’s, artists, specialized press, radios … made them draw attention outside our borders.

He combined the management of the  label until 2014, the music production and performances in different venues such as Sisyphos,  Goldengate, Weekend, Magdalena, ADE(Amsterdam), Off-Sonar (Barcelona).

As an artist at that time, Bazar Cache (as Samu) productions were being supported by the most relevant artists of the scene like Laurent Garnier, Richie Hawtin, Danny Tenaglia or Josh Wink to name a few.

After some time in silence working on different projects away from the dance music scene , he has been experimenting with other ways of production and creation in his interest in different styles of electronic music.  It denotes this variety in his first album called – SamVan Voyages –  which has been selected as one of the best national electronic albums for Mondo Sonoro, among several tops in Beatport, the track Aplástame was ranked 9th in Techno. It has also been reviewed in different media such as Mixmag, Radio 3, Vicious Magazine, Dj Mag & Mixmag Brazil, Dj Mag Latinoamerica among others.