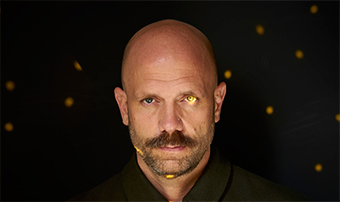 Ruben Kielmannsegge is a versatile madrilenian producer, DJ, singer and performer with german roots who is now based in Cádiz, the southernmost point in Europe.

He’s worked with artists like Quantic, Tony Allen, Wagon Cookin’, Dusty or Mojo Project, his tunes appear in international compilations like Hotel Costes (Stéphane Pompougnac), Trust the DJ (Gilles Peterson) o Chillin’ at the Playboy Mansion (Chris Coco). His productions also appear in films, such as Mi Vida sin Mi, by Isabel Coixet, which recived a Goya award for Humans Like You (produced for Chop Suey) as best original song.

He’s played in clubs and festivals all over Europe (Sönar, BBK, FIB, City Jazz Night, Kater Blau). He and his partner Belanuit are the creators of Absenta, a monthly club in Madrid which has become a reference in the city as a bold proposal of underground electronic music for the last 8 years.. Ruben is also the resident DJ at “Conciertos Mini” a Project with the National Orchestra and Choir, which aims to create a common ground for both classical and electronic music, with international artists such as  Max Richter, Arvo Pärt or Francesco Tristano.

Kingdom is his first solo release. A sort of a rave singer project, where he gathers all his influences from electronic music throughout the last 30 years. From techno to ambient via broken beat and indie dance, on his live show Ruben takes a walk through dance and pop music of the last three decades, with Alejandro Jaquotot on the visuals.